OMG! The game of the decade, way more satisfying than beating up U-M the previous week (although that was quite tasty too). Spartans surge to #9 in front of Wisconsin and Nebraska. BIG GAME next Saturday against Nebraska. STATE will win that one too. OMG! 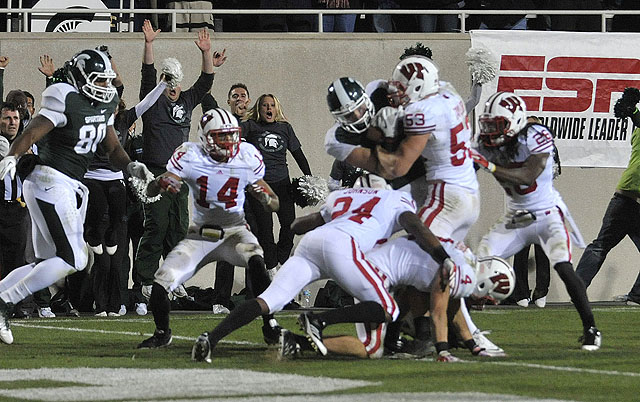 And then you have the Detroit Lions. How pathetic was that performance? No doubt Stafford has been injured since game 5 and playing injured without letting anyone know. His crushing end in the fourth quarter may be telling. But the Lions are faltering and faltering at the wrong time.

Why can we make a right turn on red but can’t go straight through on red? How many times are we sitting at an intersection with absolutely no cars coming on either side? Just think how many gallons of gas we would save.

Groupon is doing its roadshow over the next two weeks to convince investors that they are worth $11 Billion. Really? Is Groupon going to be around in a year or so?

Amazon.com not content on providing the world with just about everything is testing same day grocery delivery in Seattle.

I broke down and bought the iPhone 4S which replaces my outdated 3. Apple has once again delivered. SIRI which they acquired earlier in the year is one of the star attractions. Once again, a woman’s voice tells us what to do, how to do it and all the information we need to know. Brilliant.

How much longer will Ficano be employed? The bigger question is how can one governmental office investigate another governmental office? It seems like elected officials are only interested in staying in office as long as they possibly can, collect as much money as they possibly can, and collect enough favors so when they leave office they are well off. In regards to the voters who put them in office. . .YIKES!

Are you into Zumba? Who dreams up these new exercise schemes?

You got to hand it to John DeJoria. Not satisfied with Paul Mitchell, he developed Patron into a powerhouse brand. Now comes the new Patron ultra-premium in a crystal bottle with even bigger margins and here comes Ultimat, the new premium vodka to compete with Grey Goose and Belvedere. And here comes Mitch, his new men’s line that is ultra-chic and targeting Crew big time.

Nostalgia is going to be the next big thing. With social unrest brewing, people will thrive for the fun and frivolity of the 50’s. But here’s the thing, there were no cell phones, texting or Facebook back then.